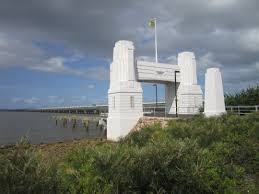 Once upon a time, the Redcliffe was quite an isolated place.

The waters of Bramble Bay meant there were several kilometres separating the Redcliffe locals from the Brisbane CBD until the historic Hornibrook Bridge was opened in 1935.

At the time, it was the longest bridge in Australia at 2686 metres, connecting the southern end of Clontarf to Sandgate at the northern end of Brisbane.

Those that ever travelled across the bridge remember its undulating road, which made for a bumpy experience – so you could still get seasick traversing the bay!

It was ultimately replaced by the Houghton Highway in 1979 as the population and demand grew, but the old toll points remain and casting a line off Hornibrook Pier is a popular pastime for locals and visitors alike.

Back to all news
Up to Date