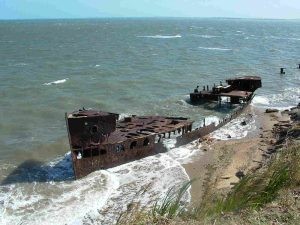 A piece of Australian naval history is part of the Redcliffe peninsula foreshore, with the remains of the HMAS Gayundah nestled against the banks of Woody Point.

The flat-iron gunboat started life as the HMQS Gayundah in 1884, first commissioned by the Queensland Maritime Defence Force and later the Royal Australian Navy (as HMAS Gayundah).

The Gayundah was part of many historic moments in Australian naval history, conducting the first ship-to-shore radio transmissions in Australia – using a bamboo aerial tied to the ship’s mast.

While she was decommissioned by the Navy in 1921, the Gayundah would continue to float until the 1950s in the private sector – finally beached at Redcliffe to be used as a breakwater.

The Gayundah remains a popular attraction to this day, despite time and the weather taking its toll.

Our community – The Redcliffe jetty

Back to all news
Up to Date